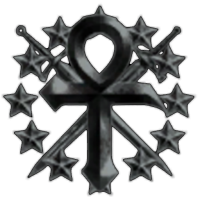 Star Frontiers is TEST's big brother that grew up and got a job. We're mostly professionals irl and we love EVE, we play for fun, and we are serious about always improving. We're a family that accepts newbros, supercapital pilots, and everyone in-between – so long as you share a similar mindset.

Star Frontiers is a PVP focused corp. We expect all members to actively contribute to PVP events, especially strategic operations. We also encourage small gang and other PVP. All of our new members are asked to go through a brief period of review, until approved by SF Leadership, so we wish to stress the point that we do view PVP as a requirement. We offer pilots a vast bank of knowledge and plenty of options when it comes to skill your character into a specific role. Ours is a relaxed environment with like-minded individuals at all skill levels for some great all-round PVP experiences.

Star Frontiers first joined Test Alliance Please Ignore in December 2013 before striking out on their own as B0SS Alliance in September 2015, then re-joining Test in 2017. SF has a long history of interaction with Test, both as friends and adversaries. It began with Test winning Fountain from IT. Coalition (SF's alliance at the time). Later, Star Frontiers were raiders out of Fountain Core as a part of Ignore This. alliance. During that time SF pilots gained a level of respect for the Test approach to EVE, so it seemed almost natural when SF joined Test in the Honey Badger Coalition as a member of Thorn Alliance and fought together during the fall of Fountain and afterwards in Curse. Shortly thereafter, a change of leadership in Star Frontiers resulted in SF formally joining Test.

Star Frontiers' time heading up B0SS Alliance was quite successful, holding sov in Fountain starting October 2015, then Tenal starting May 2016 and finally in Perrigen Falls November 2016 through August 2017 when they re-joined Test Alliance.

Star Frontiers maintains a corporate culture distinct from B0RT, but that exists in seemingly perfect symbiosis with it. Like BORT we are noob friendly, while at the same time aspiring to live up to our motto: We're Not Elitist, We're Just Tired of Fail. Like that motto implies, we aspire to play EVE at a high level - while still treating one another with respect and patience. Because of this we are ideal for the new player who considers themselves a serious, or even 'hardcore' gamer, however we have no patience for trolls or jackasses.

We have a long history of merging other corps into our own, and our culture is created by the sum of our parts. Our membership and indeed our leadership includes players from several corps that we have been honored to make a part of our history and family over the years.

Star Frontiers manages quite a respectable showing at Fanfest, Eve Vegas, Eve London, Eve Northeast, and Eve LA every year. If you plan on being at one of these events and would like to meet up, give us a shout.

Star Frontiers prides itself on maintaining a culture that is distinct from, yet a vital part of, Test Alliance. As such we seek a distinctive type of EVE player who is able to function well as part of -S-F- yet feel at home and contribute within Test Alliance as whole.

Star Frontiers is looking for recruits who are:

New recruits will be on probation for 30 days. Keep in mind, at the end of the probationary period we'll take a look and we might ask you to leave! However, doing the following things at a bare minimum will make sure you're setup for success

Failure to demonstrate an ability to do the above will likely result in dismissal from SF. We're pretty laid back, but we also want to establish standards where we can. We're not elite, we're just tired of fail.

So you're wanting to join us eh? Check out our discord for all of the info you need when it comes to joining us.

The resources there will walk you through getting setup on TEST Auth, and Submitting an app on TEST Auth to Star Frontiers.

*Recruitment is currently limited to vouches, friends of corp members, and other exceptions. If you're new to the game, we're not saying we won't have you, but keep in mind we might not have you on with us at the current time.

Our CEO is Argus Sorn. Our directorship is divided into teams with Vice Directors holding “Sub-Director” positions, and other “Officer/Staff” members who have lighter duties also mixed in with the teams, with overlapping responsibilities for redundancy. Argus gave a presentation about our corporate leadership structure at EVE Fanfest 2015.

Tasked with keeping things held down between the Directors and the Corp level, the XO's are the second in commends of the corp.

The Military team is headed up by a Director who is charged with coordinating PVP efforts for Star Frontiers, and finding us dank, non alliance level content.

Our recruitment team is charged with screening and processing all new applicants, reviewing and retaining the new members during our “probationary period” and are also in charge of the maintenance and distribution of corp documents, wiki pages, and other back-end items.

Our Quartermaster team is charged with maintaining corp structures and assets, planning and deploying new structures, and just generally keeping the lights on (aka fueling everything) for our various structures and services.

The Star Frontiers Standard is our plain English version of what we want out of every one of our members. This is especially true for our new member (During your 30 day probie period) as near the end of the 30 days we'll do a review and see if you've held up your end of the deal. If not, well, we might ask you to go after other adventures in eve… (Aka ask you to leave)

Absence or Lack of Standards

If at any time you feel that you can't meet the standards, please send a recruitment director/officer a PM. We will most likley ask you to resubmit your application when you're able to participate in our minimum standards, and will remove you from corp.

If you're away or unable to meet standards, a recruitment director of officer might try to reach out to you when doing our 30-day review, via the SF Discord. If you're not able to be reached we will allot you 48 hours to vacate any assets and will then remove you from corp.

We want to keep our standards as much as possible, thank's for your understanding.